On 11 March 1744, Samuel Baker, a “joyous fellow” with a “fondness for plum-coloured coats”, who for a decade had sold books from his corner table in Covent Garden’s Angel and Crown pub, brought the hammer down on his first auction.

Held at his Exeter Exchange salesroom on London’s Strand, the “several hundred scarce and valuable books” fetched a then substantial £826.

Exactly 275 years on, the international auction house Sotheby’s, which grew out of Baker’s entrepreneurial endeavours and is one of the UK’s oldest businesses, marks its anniversary by ringing the opening bell on the New York stock exchange trading floor. Sotheby’s is almost 50 years older than the stock exchange itself.

In London, where it all began, a small exhibition of archive photos, manuscripts and historic catalogues charts its journey from humble bookseller to holder of high-end art extravaganzas – from the books Napoleon took into exile to St Helena, to Banksy’s dramatic self-shredding Girl with Balloon and Damien Hirst’s £111m single artist record on the same day Lehman Brothers crashed.

“Sotheby’s has thrived for 275 years precisely because it has dared to reinvent itself again and again, and in so doing has continually redefined the business of trading art on a global basis,” said Tad Smith, Sotheby’s chief executive.

Now with 80 offices in 40 countries, the gavel has fallen on some legendary sales over almost three centuries. These include the original autographed manuscript of Lewis Carroll’s Alice’s Adventures Under Ground (1928), which attained a then momentous £15,400; a rare 710-year-old copy of the Magna Carta (2007), which fetched $21.3m; an autographed manuscript for Beethoven’s Ninth (2003), which raised £2.1m; and Edvard Munch’s The Scream (2012), which commanded $120m.

The writer Cyril Connolly once described Sotheby’s as an education during the drab, grey, bombed-out war years in London, “an emporium where nobody expects you to buy, a museum where all the objects are changed once a week … a university which issues three or four textbooks weekly”. It served another purpose in the second world war, when its picture basement became a public air raid shelter.

For its first 140 years, Sotheby’s sold only books, with its doormen redirecting clients arriving with paintings and works of art down the road to Christie’s. 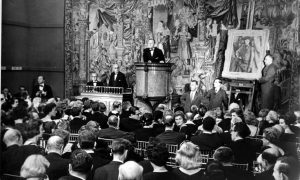 In 1917 it moved from Wellington Street, heart of the book world, to New Bond Street, hub of the art world. The move was not without problems. Archives show that one woman accused it of losing her Michelangelo, which she had “dropped off” four years previously with a porter, leaving no contact details and saying she would be back in an hour. It was eventually found.

Its years have not passed without some controversies. In 2002 it was fined £13m by the European commission for operating a price-fixing cartel with Christie’s for most of the 1990s.

One of its most memorable sales, in 1937 in the ballroom of 148 Piccadilly, a palatial residence of the Rothschild family, attracted visitors from all over the world. The first of its kind to be broadcast by the BBC, it raised a mighty £125,000.

Post-war, the landmark Goldschmidt sale in 1958, the first evening auction since the 18th century, heralded a new age for the art market. It took just 21 minutes to sell seven paintings, including works by Manet, Cézanne and Van Gogh, with the record for a painting broken three times during the sale.

Three years earlier, Sotheby’s had opened in New York. Its customers have included Hollywood royalty as well as the more traditional kind. Queen Mary, the present Queen’s grandmother, would secretly bid for lots under the nomme de vente Geoffrey.

Jan Prasens, Sotheby’s Europe and Middle East managing director, said: “As we move forward, we take a cue from our past, not just from the chronicled histories, but also from the lesser-known personal stories and quirky moments. This exhibition shows how the sort of nimble thinking and openness to innovation that’s so essential in our business now has actually always been at the heart of our DNA.”

The free exhibition, Sotheby’s 275 years, is at Sotheby’s Cafe on London’s Conduit Street from 11 March to September.

Published by ” The Guardian “