Egyptomania is expected to hit London as the largest collection of Tutankhamun’s treasures to ever leave Egypt goes on tour for the last time.

Tarek El Awady, Egyptologist and curator of the exhibition at the Saatchi Gallery, told Sky News “everyone in the world knows Tutankhamun” and the “unique show” was a celebration of 100 years since the tomb was discovered.

Mr El Awady has spent the last 25 years studying the boy king and says there are many reasons for the continuing fascination.

He told Sky News: “First the story of the discovery itself, and the amount of treasure found in the smallest tomb in the valley of the kings.

“This is the only intact royal tomb found from the new kingdom.”

The legend of the golden pharaoh has been captivating imaginations globally since his tomb was discovered in 1922 by archaeologist Howard Carter and Lord Carnarvon.

Mr El Awady told Sky News the incredible find “captured the hearts of people all over the world”.

He added: “When Howard Carter found the tomb, he opened a window for everyone – not just for Egyptologists – a window to look at the magnificent world of the pharaohs.” 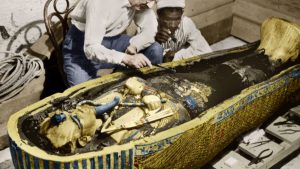 Tutankhamun died at 19, having ascended the throne aged just nine, and was buried with the most extraordinary artefacts to help him in the afterlife.

These have gone on to inspire everything from architecture to art and design in the decades since and the king’s image has permeated popular culture all over the world.

The first time Tutankhamun arrived in London in the 1970s, record crowds of over 1.5 million people flocked to the British Museum.

Jonathan Holmes, art critic and writer for The Telegraph, predicts there will be similar excitement this time round. 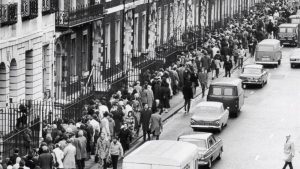 He said: “This does feel like a once-in-a-lifetime opportunity, especially for a global audience, to get to see these artefacts before they go home to Egypt forever. This is the last tour, this is the Rolling Stones, come and buy your t-shirt!”

Tutankhamen – Treasures of the Golden Pharaoh opens at the Saatchi Gallery on Saturday and runs until 3 May.